Effects of mutations in helix h28 of 16S rRNA on translation initiation in E. coli 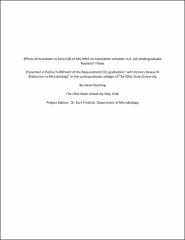 16S ribosomal RNA is the main structural and functional component of the 30S ribosomal subunit. During initiation, the 30S subunit binds three protein factors, mRNA and initiator tRNA, and then associates with the 50S subunit. The 30S contains a large “head” domain connected to the remainder of the subunit by the “neck” helix h28. Helix 28 is formed by base pairing between highly conserved nucleotides 921-933 and 1384-1396, and stabilized by interactions with helices h36 and h37. Previous studies have indicated that the structural conformation of the 30S subunit is flexible, specifically about the neck. Formation of the initiation complex appears to involve conformational changes of the head, but the role of these movements in the initiation process remains unclear. To investigate the role of the neck, we created single-nucleotide substitutions in h28 and compensatory mutations that restore the base pairs using site-directed mutagenesis. The effect these mutations have on translation fidelity was analyzed using a lacZ reporter gene with cognate (AUG) and near cognate (AUC) start codons. It was found that certain single mutations decreased translation substantially, whereas double mutations that generate alternative base pairs had comparatively small effects. Structural models of 16S rRNA suggest that the most deleterious substitutions disrupt complex tertiary interactions. These results show that the structure of h28 is critical for translation and define the relative importance of specific nucleotides.