Contraception in Practice: How Contraceptive Devices were used in Early-Twentieth Century Europe 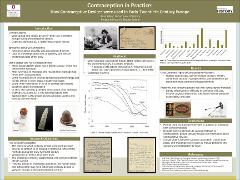 A widespread and drastic decline in birth rate occurred in Western Europe in the course of the nineteenth century. Between 1850 and 1914, fertility rates nearly halved. Yet, it remains unclear how this fertility decline was achieved. Existing literature on the subject emphasizes traditional methods of birth control (i.e. the use of abstinence, withdrawal, and abortion) as the key explanation. The availability of commercially produced contraceptive devices has often been overlooked, and few scholars have investigated the actual birth control practices undertaken by ordinary Europeans. This project seeks to investigate the use of contraceptive devices during the period historians have described as the ‘demographic transition’ during which birthrates dropped dramatically. Through an analysis of letters written by working and middle class men and women to the British birth control advocate Marie Stopes between 1918 and 1939, this project examines evidence of contraceptive practices, highlighting class-based differences in the use of birth control methods. My findings suggest that while scholars have assumed that traditional methods of birth control produced the fertility decline, a host of different contraceptive devices, including rubber caps, pessaries, sponges, and condoms were not only widely available, but also frequently used by couples who wished to prevent conception. By studying the social aspects of contraceptive history and how both traditional and non-traditional methods of birth control affected the fertility decline, historians may be able to better understand the process and the social issues that arose from it.