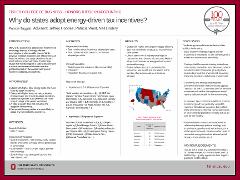 In the past few decades there has been an increased interest in energy efficient technologies and renewable forms of energy for power generation. Many U.S. states have adopted various forms of tax incentives to remove cost barriers and to encourage the use of energy efficient technologies and renewable energy. A large literature has examined the effectiveness of these tax incentives; however, this literature has placed little emphasis on the factors associated with adoption of these policies. The purpose of this study is to establish a precursor to the analysis of these types of policies’ effectiveness on the state level: an investigation into the reasons states adopt these tax incentives. Relevant tax incentive data for each of the 50 states was obtained from the Database of State Incentives for Renewables & Efficiency (DSIRE), while information about each state’s adoption factors was obtained from various federal government websites. The relationships between these variables for the 50 states were explored using a cross-sectional regression analysis. The findings reveal that the ideology of a state’s citizenry is associated with having more tax incentives for energy efficiency and renewable energy; Democratic-leaning states are more likely to adopt environmental tax incentives. In contrast, a state’s energy prices, wealth, and carbon dioxide emissions do not influence the number of these types of incentives adopted. Finally, states with a higher average annual percentage of sunny days adopt a greater number of tax incentives for solar power.