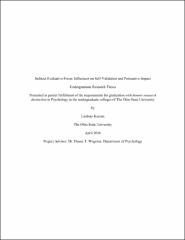 Research on self-validation has been focused on identifying variables that affect the confidence of thoughts one has about a judgment target. One of the primary variables identified thus far is the credibility of the source of the information. The typical effect is that learning after a message that the source of the information is credible increases confidence in thoughts about the message, regardless of whether those thoughts are relatively favorable or unfavorable. This pattern is referred to as content-independent validation. However, more recent research found that depending on the focus of the evaluation of a persuasive message, different patterns of self-validation can occur. When focused on evaluating the source, thought confidence and attitudes reflective of these thoughts are influenced by both the strength of the arguments and source credibility (referred to as content-dependent validation). However, when focused on the content of the message, content-independent validation effects like those discussed above occur. In the present research, instead of explicitly directing participants to focus on the source or the content, indirect manipulations were used. Study 1 used a political context where participants were instructed to either imagine themselves as a voter or a constituent of a sitting senator, whereas Study 2 employed a “mindset priming” technique using pre-message judgment tasks. Study 1 produced some evidence consistent with content-independent validation in message-focus conditions, and Study 2 produced results that looked similar to content-dependent validation in source-focus conditions. Though neither study provided strong support for both types of validation in the same study, the results suggest that less direct methods for focusing people on evaluating sources or messages might be successful in creating the same types of effects as in previous studies that used more direct focus instructions. Implications of the indirect manipulations in persuasion are discussed.