Summer Employment and Tobacco Use Among College Students 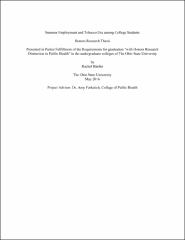 Research has shown that tobacco use among college students is influenced by the social environment, especially among a subset of smokers known as social smokers. Although many college campuses now have tobacco-free policies that could restrict social use of tobacco products, these policies often do not extend to common places of summer employment for college students that have similar social environments. Currently, no recommended tobacco policy exists for such summer programs, and little research has been done to assess their need. The objective of this study was to examine trends in tobacco use among the college-aged summer staff members of a seasonal non-profit organization. At the beginning and end of the summer employment period, an online cross-sectional survey was distributed to each eligible staff member (n=124) to examine trends in tobacco use. A total of 63 participants responded to the pre-summer survey (response rate=50.8%), while 60 complete responses were recorded for the post-summer survey (response rate=48.4%). No identifying information was collected from participants, and individual participants were not traced from pre-summer to post-summer. In the post-summer survey, 22.8% (n=13) of respondents reported an overall increase in tobacco use over the summer, while 3.5% (n=2) reported a decrease in tobacco use and 73.7% (n=42) reported no change. Additionally, of the 19 respondents who reported smoking a cigarette in the past 6 months, 0% self-identified as a smoker. However, 58.9% of these individuals identified as social smokers by indicating that they more commonly smoked in social situations. These results align with past findings about the social smoker identity and indicate the potential increase in tobacco use during summer employment. This study demonstrates the need for further research into the role of workplace influences on tobacco use among college students in order to guide potential policy changes.