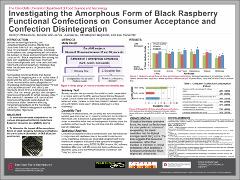 Black raspberries (BRB) are abundant in bioactive compounds and have demonstrated potent anti-cancer bioactivity in animal models and in vitro studies pertinent to oral cancer. Functional confections were selected as an ideal model for investigation because of their popularity and for their versatile food matrix. We hypothesized that the amorphous confections having the shortest residence time in the oral cavity would generate the greatest consumer acceptance and hence be the preferred method of BRB delivery. The series of sensory evaluations reported were designed to meet two objectives: 1.to assess consumer acceptance and measure the oral residence time of three amorphous forms of black raspberry functional confections. 2. to select the preferred BRB functional confections for future large-scale clinical trials. Three different amorphous functional confections (hard candy, pectin gummies, and starch gummies) having three bioactive release rates containing 4 and 8 grams BRB were formulated. A series of sensory tests were nested in a 4 week clinical trial involving BRB confections and conducted in 60 healthy adult men and women. A 9 point Hedonic score was used to measure acceptability (1= dislike extremely and 9=like extremely) and ranked preference was used to select the preferred confection. The time for each of the three amorphous forms to disappear from the oral cavity was the oral residence time. Starch confections had the greatest acceptability (Mean ±SEM, 6.5±0.2) followed by hard candy (6.0±0.3) and then pectin confection (5.8±0.2). The starch gummy was preferred among the three confections. The oral residence time was significantly shorter with pectin confections (3.9 ±0.3 minutes), followed by starch (7.6 ±0.4 minutes), and then hard candy (12.9 ±0.5 minutes). The three amorphous confections were regarded acceptable and consumer preference rather than oral residence time is important to consider when selecting a functional confection for future large-scale clinical trials.