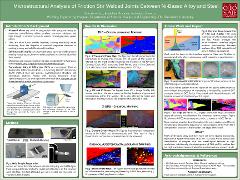 Sound metallurgical bonds between Ni-based alloys and carbon steels are often sought after for the inexpensive strength of the steel in combination with the superior corrosion resistance of Ni-based alloys, especially in the energy generation and oil industries. However, there is a multitude of weldability challenges that result from the compositional gradient and high thermal input associated with the conventional fusion welding processes. Conversely, solid-state joining methods eliminate or reduce problems stemming from the melting, mixing and solidification of the involved alloys, which are causes of several manufacturing and performance issues. In this study, Nickel-based alloy 625 and mild carbon steel A516 plates are joined together using Friction Stir Welding (FSW), a solid-state welding method consisting of displacing base metal by driving a rotating pin into a butt joint configuration and creating frictional heat. FSW parameters have been established to create a mechanically sound joint, but metallurgical investigation must be conducted to understand the joint integrity, specifically at the interface between the nickel alloy and steel, where there is a steep compositional and microstructural gradient. Phases commonly found in a steel-nickel weld interface have been characterized, including γ-nickel phase, (Ti,Nb)C precipitates and M23C6 carbides in the Ni-625 side, as well as ferrite and martensite in A516. Transmission Electron Backscatter Diffraction (t-EBSD) is an electron microscopy technique that can provide crystalline structure and orientation information; it is being used to provide data at greater resolutions: 10 nm compared to several microns found in current literature on these welds. This enables observation of microstructural features at significantly higher magnifications across larger sample areas along the weld interface. A layer of approximately 300 nm of highly strained martensite is observed adjacent to the interface, as well as carbide precipitates as small as 100 nm. Further analysis, including simultaneous Energy Dispersive Spectroscopy (EDS) and t-EBSD analysis, will be done to better understand the material microstructure and expected performance in service.