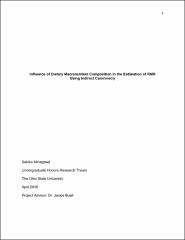 Background: Endurance running leads to high exercise energy expenditure, and dietary energy intake should be adjusted to fuel this high-energy sport. Energy requirement can be predicted by Resting Metabolic Rate (RMR) and exercise energy expenditure. RMR is the estimated number of calories burned in 24 hours to maintain basic body function and balance, and can be measured using an indirect calorimeter. Prediction of energy needs is important to properly advise athletes for their athletic performance and health. Objective: The purpose of this study is to investigate the inconclusive literature on the influence of dietary macronutrient composition (fat and carbohydrate) in the estimation of RMR using indirect calorimetry in adult female runners. RMR is often time estimated relying on assumptions, namely Respiratory Quotient (RQ), that may result in inaccurate RMR estimation in some populations, such as athletes, who have shown to have a variety of dietary macronutrient intake and nutritional status. The KORR Medical Technologies ReeVue indirect calorimeter used in this study predicts RMR with an RQ of 0.83, assuming adequate energy intake composed of a mixed diet. The statement of the problem examined in this study is as follows: 1. What is the difference in ReeVue-estimated RMR compared with the Food Quotient-adjusted RMR? 2. Is RMR influenced by Calorie Consumption or Energy Availability? Methods: Data analyzed for this RMR comparison study was recorded as a follow-up study of 44 adult female recreational runners ages 24-62 (2009H0177). The parent study was designed to evaluate the characteristics of the female athlete triad (energy availability, menstrual function, and bone mineral density). This follow-up study included a measure of RMR using the KORR Medical Technologies ReeVue. In analyzing the dietary data, macronutrient intake varied remarkably between subjects. In light of these findings, RMR was evaluated according to dietary intake. Dietary intake was evaluated using a Vioscreen Food Frequency Questionnaire (FFQ) and a self-reported three-day food record (3-FR). This data was then analyzed by ESHA Food Processor SQL diet analysis software. Energy Expenditure (EE) was estimated using the Bouchard physical activity record (B-PAR), and Resting Metabolic Rate (RMR) was estimated using the KORR Medical Technologies ReeVue indirect calorimeter. This machine estimates RMR from a measure of oxygen consumption. This oxygen consumption was combined with a Food Quotient (FQ) to determine the difference in RMR from the machine estimation. Results: This study revealed, 1. There is a statistically significant difference between RMR estimated by the ReeVue and the RMR adjusted by the FQ (Wilcoxon signed ranked test p= 0.000). However, 21kcal is not clinically significant. 2. There is no significant correlation between Calories or EA to RMR - Calories and RMR (Spearman’s rho= -0.009, p=.955) - EA and RMR (Spearman’s rho= -.112, p=.470) Discussion/Conclusion: Although there is a statistically significant difference in RMR estimated by the ReeVue and RMR adjusted by the FQ, 21kcal is not clinically significant. The ReeVue can properly estimate RMR in subjects with varying dietary macronutrient content. Despite previous literature, there was no correlation between Calories consumed and EA to RMR, suggesting limitations of this study. It was observed that female runners on a high carbohydrate diet had a greater difference in RMR between the estimation by ReeVue and the adjustment by the FQ. This suggests that RMR estimated by the ReeVue should be considered for adjustment in female runners on a high carbohydrate diet. While the ReeVue with an assumed RQ of 0.83 to estimate RMR did not show clinically significant difference compared to the RMR adjusted by the FQ. In the future, crossover studies should be performed, determining different dietary protocols in the same subjects. RMR should be determined using a full metabolic cart, which measures both VCO2 and VO2.