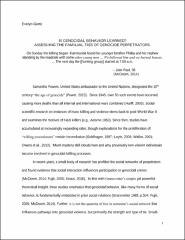 Samantha Power, United States ambassador to the United Nations, designated the 20th century “the age of genocide.” Since 1945, nearly 50 such events have occurred, causing more deaths than all internal and international wars combined. Foundational research on genocide perpetrators dates back to post-WWII and examines the motives of Nazi killers. These studies, with important exceptions, generally conclude that perpetrators are simply “ordinary men” responding to bureaucratic obedience structures. More recently, scholars have highlighted the role of interpersonal networks in shaping the dynamics of genocide. Fujii and McDoom find that local social ties, particularly those connected to kinship, explain patterns of participation in the 1994 genocide in Rwanda. Inspired by these studies, and utilizing data from Rwanda’s post-genocide Gacaca courts, I draw on criminological theories of socialization into deviance to investigate whether siblings’ behavior predicts violent versus non-violent genocidal crimes. Hierarchical generalized linear analyses indicate that exposure to siblings’ violence affects individual participation, suggesting that genocidal crime, like other types of crime, may be learned through interaction with intimate social ties.