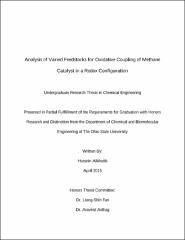 With the recent shale gas boom, researchers have been devising methods of upgrading large quantities of methane to higher valued products. One of these methods, the Oxidative Coupling of Methane (OCM), creates hydrocarbons (mainly ethane and ethylene) via the catalytic coupling of methane under oxidation. Ethane and Ethylene are starting points for many polymer materials. OCM is typically run in a co-feed configuration where oxygen and methane are simultaneously fed into the reactor. In an effort to commercialize the technology a chemical looping system has been investigated to lower capital and operational costs. Chemical looping separates catalytic oxidation and reduction into respective steps in order to remove the need for air separation. A proprietary manganese based oxidative catalyst has been developed for chemical looping and has shown promising results with respect to methane conversion. However the effects of the manganese oxide based catalyst on various light hydrocarbons have not been studied. This thesis will analyze the effect of certain pure light hydrocarbon feedstocks as well as certain hydrocarbon mixtures on the manganese based catalyst within a chemical looping.