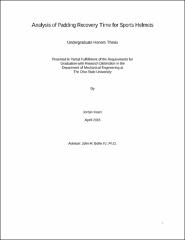 Sports helmets, for games such as football and lacrosse, are typically made with an outer plastic layer and an inner foam layer. They are designed to maximize impact energy attenuation in order to prevent skull fracture and traumatic brain injury. Although the current research focus has shifted to preventing concussions after a singular traumatic impact, no studies have specifically focused on the padding response after multiple successive impacts. This study examined the recovery time for the padding in three youth football helmets and two adult lacrosse helmets. Helmets were impacted while being worn by an Anthropomorphic Test Device (ATD) with sensors installed inside the head to measure kinematics. Impacts were designed to simulate cranial impacts during games. By repeatedly impacting the helmets and analyzing the different kinematic responses, conclusions weredrawn regarding the padding recovery time and the optimal waiting period between impacts, both in sports gameplay and in laboratory testing settings. Changes is angular velocity and linear acceleration were determined for each set of impacts. These values were also used to calculate the likelihood of brain injury based on the Head Injury Criteria (HIC) and Brain Injury Criteria (BrIC), two accepted metrics in the field of impact biomechanics. The percent differences from impact to impact were determined and trends were identified for each impact sequence. Based on the results of this study, it was determined that there was generally not a significant difference in the ability of the helmets to attenuate energy after repeated impacts. While there was more variation for lacrosse helmets, both sets of helmets followed this trend. More testing would be needed to further investigate this potential problem before thoroughly concluding that helmets incur no decrease in performance due to repeat impacts.

4th Place for Engineering at the Denman Undergraduate Research Forum