Five Phases Belief in Chu 楚: Sacrificing White Dogs to Save the Kingdom? 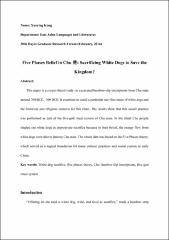 This paper is a corpus-based study on excavated bamboo-slip inscriptions from Chu state around 700 BCE. -300 BCE. It examines in detail a particular sacrifice made of white dogs and the historical and religious contexts for this ritual. The results show that this occult practice was performed as part of the five-god ritual system of Chu state. In the ritual Chu people singled out white dogs as appropriate sacrifice because in their belief, the energy flow from white dogs were able to destroy Chu state. The whole idea was based on the Five Phases theory, which served as a logical foundation for many cultural practices and social custom in early China.