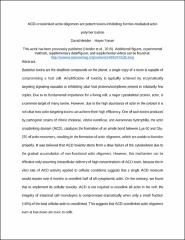 American Association for the Advancement of Science

Bacterial toxins are the deadliest compounds on the planet; a single copy of a toxin is capable of compromising a host cell. Amplification of toxicity is typically achieved by enzymatically targeting signaling cascades or inhibiting vital host proteins/complexes present in relatively few copies. Due to its fundamental importance for a living cell, a major cytoskeletal protein, actin, is a common target of many toxins. However, due to the high abundance of actin in the cytosol it is not clear how actin-targeting toxins can achieve their high efficiency. One of such toxins produced by pathogenic strains of Vibrio cholerae, Vibrio vulnificus, and Aeromonas hydrophila, the actin crosslinking domain (ACD), catalyzes the formation of an amide bond between Lys-50 and Glu-270 of actin monomers, resulting in the formation of actin oligomers, which are unable to function properly. It was believed that ACD toxicity stems from a slow failure of the cytoskeleton due to the gradual accumulation of non-functional actin oligomers. However, this mechanism can be effective only assuming intracellular delivery of high concentrations of ACD toxin, because the in vitro rate of ACD activity applied to cellular conditions suggests that a single ACD molecule would require over 6 months to crosslink half of all cytoplasmic actin. On the contrary, we found that to implement its cellular toxicity, ACD is not required to crosslink all actin in the cell: the integrity of intestinal cell monolayers is compromised dramatically when only a small fraction (<6%) of the total cellular actin is crosslinked. This suggests that ACD-crosslinked actin oligomers even at low doses are toxic to cells. Since actin-binding domains of some actin-regulatory proteins are organized in tandems, these proteins potentially can bind to actin oligomers with affinities higher than those for a G-actin monomer, due to multiple binding sites accessible on a single oligomer molecule. This would render these actin-regulatory proteins non-functional. Formins are one family of such proteins governing the actin cytoskeleton dynamics important for numerous cellular processes. The main functional domains of formins, formin homology domains 1 (FH1) and 2 (FH2), cooperate in nucleation and elongation of actin filaments. Our data indicate that formins preferentially bound to the crosslinked actin oligomers with abnormally high affinity in cell culture. We found that actin polymerization controlled by formins was inhibited by sub-nanomolar concentrations of actin oligomers. To investigate the mechanism of formin inhibition exerted by the ACD-crosslinked actin oligomers, we preformed total internal fluorescence reflection microscopy (TIRFM) to monitor actin polymerization at the individual filament level. In the presence of profilin, the oligomers caused reversible blocks of elongation of formin-controlled, but not formin-free, filaments. The persistence of the blocks, as well as the fraction of blocked filaments was dependent upon oligomer concentration as well as the length of the FH1 domains, suggesting that both FH1 and FH2 domains of formin contribute to the inhibition in profilin-dependent and profilin-independent manners, respectively. Mathematical modeling of polymerization in bulk (pyrene actin assays) and on a single filament level (TIRFM) revealed that the oligomers potently inhibit both nucleation and elongation steps of actin filament assembly controlled by formins. Therefore, our findings implicate that ACD employs a novel toxicity mechanism by converting cytoplasmic actin into highly toxic oligomers that specifically target key steps of actin dynamics. This implies that toxins can not only exploit existing signaling pathways but also initiate a new toxicity cascade with de novo produced crosslinked actin species as “second messengers.” ACD creates toxic derivatives of actin with a disruptive “gain-of-function” mode of operation. These new actin species bind with high affinity to formins and adversely affect both their nucleation and elongation. We propose that the seemingly straightforward original assumption that ACD acts by the accumulation of bulk amounts of nonfunctional actin is inaccurate or at least incomplete. The toxin can be highly efficient at very low concentrations by acting on formins and, potentially, other actin regulatory proteins. This finding calls for the careful reevaluation of mechanisms used by other actin related toxins, both of protein and small-molecule natures.