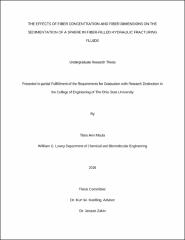 Industrialization has created a tremendous energy demand. Coupled with instability in the Middle East, the depletion of conventional oil reserves, and the development of horizontal drilling, the renewed need for hydrocarbons has led to the widespread adoption of hydraulic fracturing (“fracking”). Fracking uses high pressure fluid to fracture shale deep under the ground. To increase the permeability of shale, sand-like proppant particles are added to the fluid, necessitating the use of viscosifying agents and other chemical additives to retard proppant sedimentation. Since certain additives used in fracking fluids are hazardous, specifically the crosslinker sodium tetraborate, concerns over the environmental sustainability of fracking proliferate. Among them is fracking's potential for contaminating groundwater reserves. Previous research has found that adding a small concentration of fibers into fracking fluids allows for a reduction in crosslinker loading while achieving similar proppant retardation effects. In this research, experiments were conducted to study the effect of fiber dimensions and concentration on the sedimentation velocity of proppant particles in fiber-filled fracking fluids. Furthermore, this research has resulted in a computational model for predicting the settling velocity of a sphere which accounts for the presence and dimension of fibers. And while most proppants are aspherical, knowing the settling behavior of spherical particles are still instructive. In the flow regime experimentally observed in this research, sphere sedimentation models developed for power-law fluids are applicable for similar circumstances in fracking fluids, and the presence of fibers can be accounted for by performing a momentum and energy balance on sphere-fiber interactions. The purpose of this research is to determine the optimal fiber properties for fracking applications and streamline the process of searching for the appropriate fiber given certain rheological properties of a fluid. This research is not only relevant to making fracking more efficient and environmentally safer, this research is also relevant to the paper manufacturing and concrete reinforcement industries.