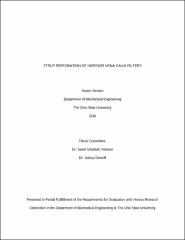 This study aimed to determine and investigate the mechanical factors associated with the strut perforation of retrievable inferior vena cava filters (IVCFs) in patients. Furthermore, it aimed to reveal reasoning for the difference in perforation rates among male and female patients and between patients with and without a history of malignancy, as was observed in a former study. The resulting information could be used to discuss follow-up procedures and to determine if three-dimensional (3D) finite element modeling may be used to predict perforation. To perform this study, 37 patients indicating perforation with a Cook Celect IVCF were observed, each having at least three computed topography (CT) images after placement of the filter. Three-dimensional (3D) finite element modeling in ADINA was applied to simulate the IVCF at each CT image set. The 3D model was deformed according to the filter strut positions relative to the center of the filter calculated from the corresponding CT image. The resulting maximum and average total and normal forces on each strut face were recorded from the simulation and compared to the filter strut perforation in the following CT study. The percent of total perforated struts that occurred below a certain force value was plotted and a sigmoidal fit was determined. Additionally, the percentage of struts that perforated within a defined force range was calculated and plotted. The data was initially classified according to patient gender malignancy history. It was further classified according to IVC diameter at filter placement and in follow-up CT studies. By investigating the role of IVC diameter in combination with patient gender and malignancy history, it was observed that female patients and patients with a history of malignancy were more susceptible to perforation, particularly at lower IVC diameters. In patients with a history of malignancy, data suggested that lower forces can result in perforation. However, inconsistent results occurred for these forces in female patients. Further investigation may be required for a better understanding of the role of IVC diameters, in addition to patient gender and malignancy history. When observing patients with larger IVC diameters, the difference between female and male patients, and between patients with and without a history of malignancy, decreased.