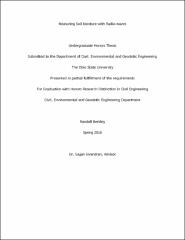 Soil moisture has been linked to many pressing enviromental issues, but due to the large natural variability in soil texture, there is no efficient way to observe the spatial (hortizontal and vertical) and temporal dynamics on a large scale. This study will focus on using radio-frequency identification (RFID), technology in an effort to expand the scale on which soil moisture can be measured. Application of RFID sensors allows for a cheap, wireless, powerless system that could be deployed across large area. Current progress in this study has demonstrated a noticeable correlation between the received signal strength and the moisture content of the soil using radio frequencies of 902-928 MHz. It is anticipated that through further research, using RFID readers that have a received signal strength indicator (RSSI), soil moisture can be measured accurately and efficiently. This paper will discuss results from experiments that observe the effects that confounding variables such as separation distance between the reader and sensors, soil moisture, and depth of the soil have on radio waves.