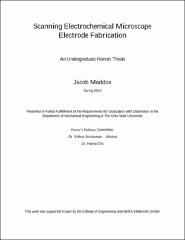 Current electrochemical methods subject a sample to an electrical potential and monitor the current to study chemical reactions associated with the reduction-oxidation (redox) reactions. Among electrochemical characterization methods, scanning electrochemical microscopy (SECM) examines the electrochemical behavior at a liquid-solid or liquid-liquid interface. SECM is accomplished via a nanoelectrode which probes the interface and measures the (redox) current in the near field vicinity of the nanoelectrode tip. The redox current measured is not only dependent on the reaction itself, but also varies with the distance between the electrode and sample making it difficult to analyze rough samples. To compensate for topographic variation, shear force (SF) imaging can be used simultaneously to maintain a constant working distance between electrode and sample. The SF imaging technique is applied by attaching two piezoelectric wafers to the nanoelectrode to both induce and measure the amplitude of vibration along the nanoelectrode tip in solution. This vibrational behavior varies in the immediate vicinity of a surface at certain operational frequencies and can be used to directly map distance from a surface to electrical potential experienced by the measuring piezo. Currently, there are limitations to this technique due to structural damping in the electrodes that results from fabrication and limit their sensitivity during SF operation. The purpose of this work was to develop a fabrication technique for SECM nanoelectrodes with less structural dampening for enhanced SF imaging. Failure mode analysis of previously researched fabrication techniques (10% yield) was conducted to determine modifications needed to produce a new method with a predicted 60% yield. Furthermore, the SF amplitude and sensitivity of nanoelectrodes produced using the new method were increased by 250% and 210% respectively on average.

3rd Place in Engineering at the 2016 Denman Undergraduate Research Forum