Donor Competition in Foreign Aid: The Results and Implications of States Receiving Aid from Rival Powers 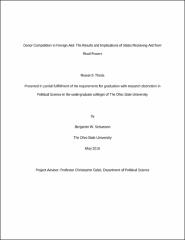 Foreign aid, despite making up less than 1 percent of the US federal government’s budget, is a contentious issue in American public discourse and foreign policy. For many recipient states, American foreign aid comes in the form of economic development aid, humanitarian assistance, military assistance, or credits or lower interest rates on loans to purchase US goods. However, in many cases, the United States is not the sole contributor of assets to a state-in-need. This becomes especially complex when states that have tense relations with the US, such as the Russian Federation and China, also donate money to that same state. This thesis seeks to address in an analytic manner whether foreign aid from rival countries tends to induce the US to give more aid to that same country, perhaps due to a competition dynamic. Furthermore, the thesis also seeks to determine whether the donation of funds from countries with very different foreign policy objectives actually has a negative relationship with metrics of state quality-of-life, such as gross domestic product per capita. Analyses have shown that there does exist a competition dynamic between states, and that aid is given to better governed states. However, this aid does not seem to have a correlation with improvement in GDP per capita or good governance metrics. Additionally, aid is not necessarily given to recipient states most in need. This thesis is only an exploratory survey and cannot make long-term causal claims; nevertheless, it establishes interesting evidence for the existence of a donor competition dynamic in the 2010s.