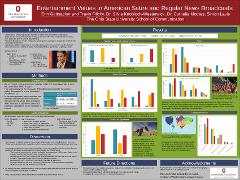 As the mass media have proliferated on American television, news programs have evolved from the traditional evening network news format and now even take the form of satirical programs. News organizations today seek to maximize audience viewership through the incorporation of entertainment values, including dramatic framing, audio-visual elements, and audience interaction. This study analyzed the extent to which these factors were used in various satire, network, and cable news broadcasts through content analysis, focusing on three levels of depth: newscast, news item, and actor. The analysis included two satire newscasts, The Daily Show and The Colbert Report; two network newscasts, NBC Nightly News and ABC World News; and three cable news newscasts, The Rachel Maddow Show, Special Report with Bret Baier, and Anderson Cooper 360. Content from these shows was analyzed across two constructed weeks in 2014. Intercoder reliability was high for both content coding (Krippendorf's a= .735) and itemization of content (Guetzkow’s U = .011). Each style of newscast had its own unique presentation elements and trends, but across network, cable and satire news, stories about accidents, disasters, and crime were the most common, representing 14.2% of all news stories. Dramatization of conflict was more common than agreement in the news broadcasts, especially in cable news shows where 66.9% of news stories featured conflict. The executive branch, including the president, was the most common actor in network and cable news, presented in 30% of all news items. In network news, however, ordinary citizens were the most common actors, and were portrayed as victims 38.8% of the time. As our media continue to incorporate entertainment values into news programs, concerns are raised about the quality of the media that viewers consume, the information they learn from news broadcasts, and the role that news media play in democracy.