The Politics of Peter and Paul: Artistic Appropriation of the Battle of Lepanto in the Tomb of Pius V 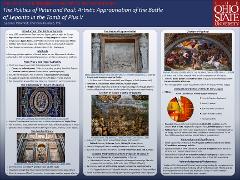 On October 7th, 1571, in the expansive Gulf of Lepanto, a vast flotilla sent by the powerful Ottoman emperor Selim I prepared to crush a tiny tripartite fleet sent by Spain, Venice, and Rome in a desperate bid to halt invasion of the European mainland. But with a miraculous shift of wind and expert leadership, the Holy League triple armada managed to vanquish their opponents in a battle that was instantly hailed throughout Europe as a divinely sanctioned triumph. My research focuses on one salient and unexamined artistic representation of the battle of Lepanto, Egidio della Riviera's reliefs adorning the lavish tomb of Pius V, the architect of the successful Holy League triple alliance. Drawing on analysis of diverse portrayals of the battle across Italy and new high quality photographs taken on site in Rome and Venice, I contend that the Pius V tomb reliefs were intended to establish a metaphorical agenda arrogating the Battle of Lepanto as a categorically Roman achievement. The motivations for this distortion are supplied by a wealth of literary and scholarly sources from the era that emphasize the incredibly fractious nature of Rome's participation in the Holy League, and the papacy's growing concern over its political obsolescence in the face of rising European powers like Spain. The insights gained from this study will illuminate a previously undeciphered artifact of Roman propaganda, and contribute to the understanding of the political machinations of Rome, Spain, and Venice during the 16th century.