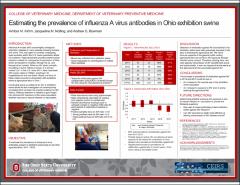 Influenza A virus (IAV) causes a highly contagious respiratory disease in many species including humans and swine. This viral agent is currently undergoing rapid evolution within the U.S. swine population where it is has been endemic for nearly a century. IAV transmission across the swine-human interface at agricultural fairs has resulted in greater than 300 documented cases of human illness. Measuring the prevalence of antibodies against IAV in swine populations is essential to assess the effectiveness of current vaccines and to improve future vaccines with the goal of slowing inter-species transmission and improving public health. A total of 189 swine sera were collected over 5 years on the last day of one large agricultural fair from 2011 through 2015. The swine present at this fair each year are believed to be representative of the larger Ohio exhibition swine population due to the fair’s wide geographic reach. The sera samples were tested for antibodies against IAV using enzyme-linked immunosorbent assay (ELISA). While IAVs are sub-typed on the basis of two surface proteins: hemagglutinin (HA) and neuraminidase (NA), the ELISA test detects antibodies in the sera against nucleoprotein, which is non-subtype specific, and a thus pan-IAV target. Of the 189 tested, 110 (58%) sera samples were positive for antibodies against IAV. Yearly prevalence for 2011 through 2015 was 51%, 45%, 28%, 83%, and 96% respectively. The increase in estimated prevalence of antibodies against IAV in 2014 and 2015 could be due to sampling bias, an increase in vaccination against IAV, or exposure to IAV prior to entering the agricultural fair. Future direction includes determining how well this previous IAV exposure is protecting exhibition swine against IAV and if IAV vaccines can be made more effective in slowing transmission as a result.