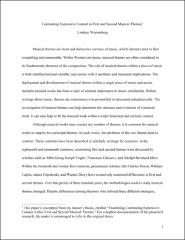 Since the 18th century, music theorists have noted the tendency for art-music works to contain themes exhibiting contrasting expressive content. In music exhibiting two main themes, the first theme is commonly characterized as stronger or more energetic, whereas the second theme tends to be gentler or more lyrical (Marx, 1845; Koch, 1793). In the first study, an examination of 1063 musical works was conducted using the Humdrum Toolkit, where first and second themes were compared on six structural features: modality, average interval size, rhythmic smoothness (nPVI), pace, dynamics, and articulation. Consistent with the higher energy hypothesis, first themes tend to be faster, louder, more detached, and use larger interval sizes than do second themes. The second study, a perceptual task, tested whether people are sensitive to these changes in musical structure. Musicians (n = 44) were tested on their ability to discriminate between pairs of musical themes in 22 piano works. Participants completed two tasks, one based on the musical score and one based on sound recordings. The task was presented in an alternative force choice format, where people were asked to identify which of the two themes comes first in the music. Additionally, the type of information available in the musical excerpts was manipulated so that in some trials, participants did not have access to dynamic and articulative information. The results indicate that musicians are able to differentiate between first and second themes in both the score-based (p < 0.001) and recording-based tasks (p < 0.01), and that people perform better when information about dynamics and articulation is included (p < 0.01). The results are consistent with the claim that musicians can perceive structural and expressive differences between first and second themes, even outside of the original musical context.