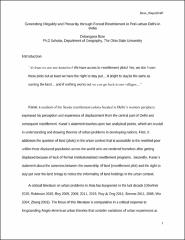 The United Nations (UN) entrusted the UN Habitat in 2006 with the responsibility to assist member states to monitor and gradually attain the “cities without slum” target, also known as Target 11 of the Millennium Development Goals (Millennium Development Report 2015). In large cities in India, migrants frequently squat on public land in inner city where they have easy access to basic amenities such as sanitation, drinking water, and health care as well as job opportunities. Target 11 prescribes its member states to provide tenure rights to the poor squatting in public land in large cities. However, instead of ensuring land-tenure rights city governments in India have displaced the poor from the inner city to the periphery through forced resettlement programs. Following economic reforms in 1991, large cities in India opened up to the global investment market and adopted decentralized governance forming localized public-private partnerships called Urban Local Bodies (ULBs). Since the 1990s city governments along with the ULBs and transnational firms (TNCs) – what I call the city government-ULB-TNC complex or Growth coalition– have undertaken projects to restructure the social and spatial composition of the city to create a slum-free city attracting foreign investment (Ghertner 2011, Kundu 2009). In Delhi alone, the city government has evicted around 420,000 slum households in the inner city since the 1990s, constituting 15 percent of the city’s population (Sheikh et al. 2014). Approximately 50 percent of the displaced poor have been resettled in the planned resettlement colonies located in the periphery. The resettlement policy permits the resettled to live on—but not own, rent or sell—plots, and prohibits commercial activities in the resettlement colonies (Sheikh & Banda 2014). However, approximately 40 percent of the resettled sold their plots through illegal land markets controlled by land mafias who sell the plots to other displaced poor lacking entitlement to resettlement, thereby creating new forms of illegal settlements within the planned resettlement colonies. I ask why the resettled are restricted from owing, selling or renting their plots and why do they sell their plots through illegal land markets? How and why illegal land markets are produced and what are their implications in terms of the expansion of the city and the lived experiences of the local residents? My research strategies draw from qualitative methods informed by critical ethnography, feminist studies as well as post-structural theory. Countering the conventional science-inspired triangulation approach, which involves the use of multiple methods to verify the Truth, I follow Ellington’s ‘crystallization’ as field approach to recognize the existence of multiple realities viewed from different lenses (Ellingson 2009; Elwood 2010). Drawing from semi-structured interviews and focus groups with local residents during my field research in summer 2015 at Savda Ghevra, the largest resettlement colony in Delhi, I explain how lack of tenure rights of resettlement plots and prohibition of commercial activities in these plots compel the unemployed poor to take up illegal avenues to earn livelihood. I also conducted semi-structured interviews and focus groups with multiple actors such as local leaders, land mafias, NGO workers, local lawyers assisting residents in resolving property conflicts and actors of the Growth coalition to understand their perception about as well as lived experiences of illegality. Interviews with officials at the Growth coalition also reveals that they are aware that residents of the resettled colonies routinely sell their land illegally, and moreover, both the residents and the Growth coalition recognize that illegal activities will be suppressed in future through the eviction of the new illegal settlers by the government to grab land for urban expansion. Archival research shows that ‘legitimation,’ the act of making something acceptable to the public, is an important strategy for land grabs in urban planning in India. For example, throughout the 1990s the middle class, the ULBs and the TNCs have identified squatter settlers in the inner city as encroachers, ‘nuisance,’ and agents of environmental degradation to legitimize their plea for slum eviction to the judiciary issuing court orders for eviction (Baviskar 2003 ;Ghertner 2011,2012). Moving beyond the common conception that resettlement territorializes the poor, my research shows that resettlement also is a process creating new forms of illegal settlements, legitimizing further rounds of eviction by the Growth coalition to acquire more land for development projects. The threat as well as experience of multiple rounds of displacement legitimized through the production of illegality thereby constructs precarity, a persistent condition of uncertainty having deleterious consequences among the urban poor (Ettlinger 2016). I draw from Foucault’s conceptualization of ‘popular illegality’—the tacit and tolerated non-enforcement of laws—which recognizes that illegality is essential for the normal functioning of the society and that it becomes an organized form of governance (Foucault 1977). Illegal activities do not necessarily indicate the absence of order or norms; rather, the widespread nature of illegal practices constitutes ‘normal’ life. For example, Foucault explains that the modern penal system was not designed to eliminate crime but to differentiate ‘rights’ from ‘wrongs’ and assign punishment to particular crimes (Foucault 1977). In the resettlement colonies in Delhi informal institutions of land markets and illegal commercial activities sustain a locally organized system of livelihood for the poor, setting the government free of welfare-related responsibilities such as providing land tenure or jobs. My research contributes to a broader ongoing debate on the suitability of Foucauldian framework of analysis in the international context as well as to the literature on the interaction of a regime of poverty and regimes of planning.