Lincoln's Divided Legion: Emancipation and the Political Culture of the Army of the Potomac, 1861-1865 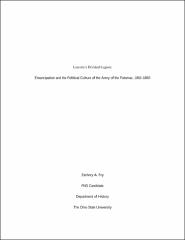 The Army of the Potomac was the most politically unstable and problematic of all the Union field armies in the Civil War. This project examines the partisan divide within the army by exploring the extent to which such issues as emancipation and conscription caused heated disagreement from the top of the command chain down to the enlisted men. Soldiers often carried out these debates in the public eye by contributing to newspaper columns, which in turn influenced the northern public sphere. The dissertation also tracks the process by which Republicans in the army were able to monopolize the concept of wartime loyalty by 1863 to mean a disavowal of many in the Democrat Party. When former General George B. McClellan emerged as the Democrat standard bearer in 1864, soldiers turned on their old commander and voted instead for Lincoln and the war platform.