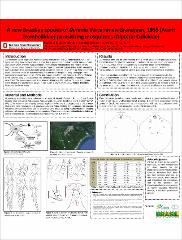 Mites in the family Trombellidae have a life cycle combining a larva that is parasitic, heteromorphic nymphs and adults, which are free-living predators. In the genus Durenia, the larvae are reported paraziting adult flies (Dolichopodidae and Culicidae). This genus has only seven described species, of which three were described based just on the larval instar (D. bukavuensis, D.singaporensis and D.papuana) and only D. bukavuensis have the larval and post-larval instar (nymph) described. The genus was report in Angola, Singapore, Papua New Guinea, Congo and Chile. In this study, a new species of Durenia is described based on the larval instar. The mosquitoes (Diptera: Culicidae) with mites were collected in an area of Atlantic Forest in Palmito State Forest, located near the city of Paranaguá, Paraná state, southern Brazil (25º 35 'S and 48º 32' W), in March of 2015 using a Nasci aspirator. Mites were photographed and measured using a Nikon Eclipse 90i compound microscope equipped with camera Nikon DS-fi1. Drawings were prepared using Adobe Illustrator imaging software. All measurements are in micrometers. Durenia sp. new. can be differentiated from all other larvae in the genus by having 4 solenidia (sensorial setae) on femur III (vs. 2 in D. bukavuensis and D.singaporensis and 6 in D.papuana ) and by the length of the solenidia on tibia II (ω II = 18,8 - 25 vs. 28, 11-12 and 14-15 in D. bukavuensis, D.singaporensis and D.papuana, respectively). It also can be differentiated from D. bucavuensis and D. singaporensis by the distance between the bases of the antero-submedian setae in the dorsal scutum (AMB = 3,5-4,6 vs. 8 and 8-9, respectively) and from D. papuana in shorter ventral setae. (VS= 11,0-20,5 vs. 24 – 36 in D. papuana).

Coordination for the Improvement of Higher Education Personnel (CAPES), a Brazilian government agency.