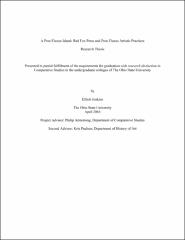 The Fluxus paradigm, which took shape in the 1960s, is a movement that was founded on an experimental artistic lifestyle. Artists sought to synthesize art and life and emphasized intermedia artistic practices that subverted the mainstream art world through creating art that was simple, playful, and sometimes created by chance. Fluxus has become an extremely enigmatic artistic movement over time and has caused some scholars to concretize it and drain its life force. Other artists and scholars believe that Fluxus is still fully alive today - just iterated in a different form. This is the crux of Fluxus thought: is it ever-changing and constantly adapting to contemporary culture. While I do not contend that this key characteristic is false, I assert that the key aspects of Fluxus ideologies in the twenty-first century can also open up new avenues of interpretation. I also wish to introduce the idea that Fluxus has inspired a relatively new artistic practice - a "post-Fluxus" practice. Francis Van Maele, Antic-Ham, and their Red Fox Press are the epitome of this "post-Fluxus" mode of artistic practice. For Franticham, Fluxus is a touchstone for many of their publications. But they also go beyond that paradigm with their use of contemporary technology, the way in which they craft their global artistic community, and the way they view their place in the complex history of art. While asserting that a "post-Fluxus" mode of artistic practice exists within Red Fox Press creates more questions than it answers, it allows us to think critically about the issues that come with understanding the history of art as a linear progression and based within the traditions of its predecessors.