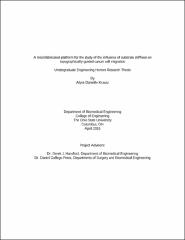 Cell migration is an essential aspect of embryogenesis, immune responses, and wound healing, but it is also a defining characteristic of highly malignant and aggressive forms of cancer, such as breast adenocarcinoma. Breast cancer cells prefer to migrate along highly oriented collagen fibers within breast tissue. However, the migration pattern of breast cancer cells could also be impacted by the stiffness of the surrounding mammary tissue. To better characterize the migration of different types of cancer, we developed an in vitro system to study the migration of cancer cells along micropatterns on substrates of varying stiffness. Previous work investigated the migration of glioma, lung, and colon cancer cells on polymers including polystyrene (PS) and polydimethylsiloxane (PDMS, silicone rubber), but these substrates are orders of magnitude stiffer than native tissues. To address this shortcoming, polyacrylamide (PA) gels were created with Young’s moduli of 1 kPa, 10 kPa, and 120 kPa. Existing PA recipes were adjusted so that 5 µm lines were maintained in the PA gels using a patterned SU8 wafer as a mold. Preliminary studies were conducted using metastatic, migratory breast cancer (MDA-MB-231) cells. It was found that the cells migrated at a velocity of 0.65 ± 0.13 μm/min (39 ± 7.8 μm/hr) on the 10 kPa polyacrylamide gels. It was not possible to obtain migration velocity data for MDA-MB-231 cells on the 1 kPa and 120 kPa gels due to pattern swelling (1 kPa) and poor cell attachment (120 kPa). Future studies using glioblastoma cells lines, patient-derived breast cancer cells, and patient-derived glioma cells could ultimately lead to improved treatment options and prognoses for patients.