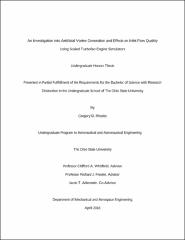 Jet engine inlet vortices have a tendency to form when the engine is stationary and operating at high thrust settings, such as during warmup and takeoff. A vortex will attach itself to the ground and extend upwards into the fan of the engine. This greatly increases the likelihood of damage to the engine fan and numerous internal components due to ingestion of foreign object debris (FOD) into the engine or engine vibration, which can directly lead to catastrophic engine failure. Naturally occurring vortices are extremely unsteady and unpredictable, making them particularly difficult to study. In order to study these vortices in a more efficient and inexpensive manner, an artificial vortex generator was designed and built. The vortex generator was designed to effectively and consistently imitate a naturally occurring vortex by adding swirl to previously established axial airflow via tangential air injection. This generator was placed on an artificial ground plane beneath an Ejector Powered System (EPS) type engine simulator to simulate an engine free-field environment. After visual confirmation of vortex formation, total and static pressures across the inlet of the engine simulator measured pressure fluctuations during the ingestion of the artificial vortex. The inlet distortion caused by the artificial vortex generator was comparable to the distortion expected to be seen by a naturally occurring vortex. Further analysis into inlet vortex effects on static pressure inside the engine bellmouth yielded lower static pressures due to increased velocity in the boundary layer as compared to a free field engine run. The vortex generator was able to provide the necessary ambient vorticity required for a vortex to form. Investigating the nature by which an inlet vortex adversely affects jet engines plays a crucial role in jet engine inlet research and design. The following research will provide a strong foundation in the ability to consistently ingest a vortex into the engine, allowing for more efficient studies in how to mitigate vortex induced complications.