Mitigation of Methane via Nitrate Feed and Yea-Sacc Supplementation 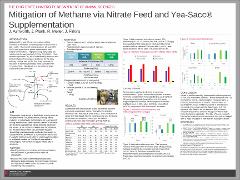 Dairy cattle are responsible for approximately 128 kg CH4/head compared with swine and beef (1.5 and 53 kg CH4/head, respectively). The aim was to feed nitrate to dairy cows to mitigate ruminal CH4 production by competing with methanogens for H2 produced during fermentation. Selenemonas species of bacteria are stimulated by yeast, so Yea-Sacc® was added to encourage selenomonads to drive DMI and propionate production from lactate. Three squares consisting of 4 lactating Jersey cows each were fed either a diet containing urea or calcium nitrate. Cows were given TMR twice daily with 50 g of a ground corn control or Yea-Sacc® topdress. After a transition period, the cows were on a final diet of 1.5% NO3 on a DM basis. On the fourth week, rumen, blood, milk, and CH4 samples were collected. Each period was at least 4 weeks. Rumen samples were collected at 0, 3, 6, and 9 h post feeding, and 6 N HCl was added to stop fermentation for subsequent VFA and ammonia concentrations. CH4 sampling was taken 8 times over a 3-day period. Blood samples were taken prior to, and 3 h following, feeding for subsequent methemoglobin analysis. Ammonia concentration increased from 10.3 to 12.2 mg/dL of NH3N (p=0.11) when fed NO3, which supported proof of concept. CH4 production decreased (p<0.01) when cows were fed NO3. An interaction of NO3 and Yea-Sacc® (p=0.01) was explained by Yea-Sacc® decreasing acetate:propionate without NO3 but increasing it with NO3. Total protozoa numbers increased (p=0.02), probably explaining the increased butyrate (p<0.01). Methemoglobin increased (p=0.01) slightly from 0.55 to 1.53%; however, being below 30%, this was not a concern. Future research should focus on increasing DMI. Lower dosages or other NO3 forms might improve palatability. Determination of bacterial DNA results would help explain if Selenomonas species increased when NO3 and Yea-Sacc® were fed.