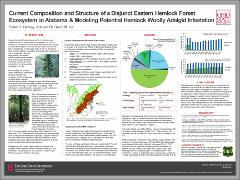 Eastern hemlock (Tsuga canadensis (L.) Carr.) is a coniferous tree species native to a large portion of the eastern United States, and it is important in its role as a foundation species and in its contribution to landscape biodiversity. The southernmost populations of hemlock occur in Alabama, and these populations are unique in that they are disjunct from the main range of hemlock that has its southernmost point in northern Georgia. Unfortunately, the hemlock woolly adelgid (Adelges tsugae Annand; HWA), an invasive insect native to Japan, has been causing extensive hemlock mortality since the insect’s accidental introduction into the United States in 1951. This insect has caused the rapid decline of hemlock throughout the South but as of this time has not reached Alabama. The hemlock populations of Alabama will likely be among the last hemlock-dominated forests in the South to be impacted by HWA. It is hypothesized that the geographic location of this forest ecosystem type makes it highly susceptible to HWA infestation that would significantly alter the forest’s successional trajectory. The objectives of this study were to: 1) examine the current composition and structure of a disjunct eastern hemlock ecosystem type in northwestern Alabama, and 2) model the effects of hemlock mortality from HWA infestation at this southern boundary of the hemlock’s range using the U.S.D.A. Forest Service Forest Vegetation Simulator (FVS) and the Hemlock Woolly Adelgid Event Monitor. This study serves as a baseline to inform future HWA management efforts in the region. Plot sampling was performed during May 2015 in two hemlock-dominated stands on the William B. Bankhead National Forest in northwestern Alabama. Quantitative measurements of the woody plants, physiography, and soil were collected on a total of ten 200-m2 plots. Hemlock dominated the overstory (49% importance value; IV), although oak species (i.e., Quercus montana, Quercus alba, and Quercus coccinea; combined 27% IV) were also prevalent. Hemlock also dominated the large sapling size-class (49% relative density), though deciduous species (e.g., Quercus montana and Acer rubrum) dominated the smaller size-classes in the understory. The A-horizon of the soil in the study area was acidic with a pH range of 4.5-6.5, and steep northerly aspects characterized the physiography of the study area, with slope gradients ranging from 20-35%. The FVS model predicted that the initial HWA infestation in the study area will occur between 2024 and 2027, and with a decline in hemlock basal area >99% by the year 2060. Total basal area of the forest was forecast to remain relatively unchanged, and it was predicted that deciduous tree species (e.g., Quercus montana and Quercus alba) will replace hemlock when an HWA infestation occurs. This shift from a coniferous forest ecosystem to one dominated by hardwood species will substantially alter forest composition and structure as well as the ecosystem services that this forest provides.