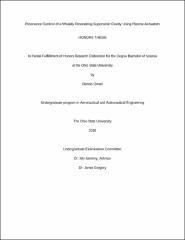 Scramjets can provide efficient propulsion for aircraft flying at speeds greater than Mach 5. However, they are susceptible to engine unstart. Typically, thermal choking in the combustor is the cause of engine unstart. Unstart leads to loss of thrust and stalled engine operation. Isolators are generally employed to prevent unstart. The performance/stability of the scramjet engine operation could be increased by augmenting the isolator’s unstart prevention capabilities. It is hypothesized that a resonating cavity imbedded in the isolator could supplement an isolator’s capabilities by trapping the upstream travelling shock train to prevent unstart. The cavity geometry and Mach number determine the natural resonance state of the cavity. Since the Mach number will change in-flight, the cavity must be controlled to ensure it is resonating when needed. This study will assess the ability of plasma actuator to influence the resonance of a weakly resonating supersonic cavity. Investigation of various cavity geometries allowed for a cavity with a rounded trailing edge and a length to depth ratio of 4.4 to be selected for the desired weakly resonating case. Time resolved pressure data on the cavity floor, collected when actuation frequency was varied from below the 1st Rossiter mode to above the 6th, showed no resonance enhancement, so the frequency sweep was refined. Refined sweeps showed localized amplifications near the 4th Rossiter frequency and its 1st harmonic when excitation near the 4th Rossiter frequency was introduced. This meant better shock trapping capabilities could be assessed at the 4th Rossiter frequency and its 1st harmonic. However, the effects of Electromagnetic Interference (EMI) must be reduced to improve the assessment. Therefore, further tests will be run to eliminate the effects of EMI. The shock trapping capabilities of the chosen cavity will be further assessed next using a shock generator.