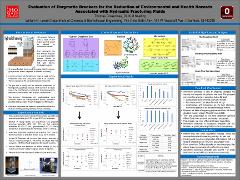 Hydraulic fracturing ("fracking") is the process in which highly-pressurized fluids are injected underground to obtain energy resources that could not otherwise be accessed. Under high pressures, fissures are created in rock formations, which free trapped energy resources. The fluids used are composed mostly of water with chemical additives, which each add a specific functionality. A polymer increases fluid viscosity to initiate the fracture. A crosslinker may be added to further increase viscosity. Breakers decrease fluid viscosity for flowback. Despite its ability to retrieve critical energy resources, a primary concern with fracturing is its impact to human health and the environment. Many fluid components are toxic and there is fear that the fluid may contaminate groundwater. The goal of the research was to identify alternative components for fracturing fluids. Specifically, breakers were examined. Current breakers are strong oxidizers which degrade the polymer by a free-radical mechanism at high temperatures. Enzymatic breakers, however, are benign to environmental and human health. Two cellulasic enzymes, β-mannanase and α-galactosidase, were proposed as alternative breakers and their performance was compared to that of ammonium persulfate, the industry-standard breaker. Polymer (0.5% wt. guar) and crosslinked polymer (0.5% wt. guar, 0.25% wt. sodium tetraborate) fluids were broken at well conditions (50oC) and industry-standard concentrations (ammonium persulfate: 0.01-0.1 wt. %; enzymes: 0.01-0.1 U/mL) over time (18 hr.). Rheological testing of these fluids included frequency sweeps (0.1-100 rads/s) and steady shear rate sweeps (0.1-100 1/s) to determine viscosity change over time and breaker kinetics. Filter cake testing was performed to study polymer degradation over time, as the breaker liberated low molecular weight oligomers. Enzymes show promise in competing with ammonium persulfate as a breaker, although further testing is necessary. More environmentally-friendly components for fracking fluids may allow hydraulic fracturing, important to the US energy portfolio, to continue with substantially-decreased risk.