Why Are Millennials Buying Fewer Cars? 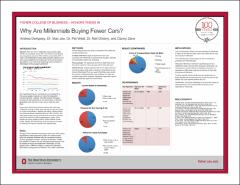 Millennials are the largest generation in the U.S., hitting 75.3 million in population in 2015 and expected to spend over $200 billion in 2017. However, they are buying much fewer cars than generations before them, and the number of millennials who purchased a new car dropped 30% from 2007-2011. Previous literature on this subject explains the authors’ opinions and speculations as to why millennials are buying fewer cars, but no one has conducted a scientific study to discover millennials’ true attitudes. The purpose of this study is to understand if millennials are buying fewer cars due to financial reasons, or if they are buying fewer because they truly do not need or want to own one. 250 millennials across the United States responded to a survey regarding their views on car ownership via Amazon’s Mechanical Turk, and a chi-squared test was used to analyze the results. Results show that there is no relationship between geography or income and car ownership, but there is a positive relationship between being a college graduate and owning a car. Additionally, of the respondents who do not own a car, 42% responded it was due to financial reasons, but 58% said it was because they do not need to own one. These results rejected the hypothesis that young people are buying fewer cars due to their relocating to cities, but they did support the hypothesis that young people do not have the financial resources to purchase a car now but will do so in the future. This research shows that U.S. car manufacturers can expect to see an increase in millennial car purchases as millennials age, but millennials will still not buy cars in the large amounts previous generations did.