The Oracle
JavaScript is disabled for your browser. Some features of this site may not work without it. 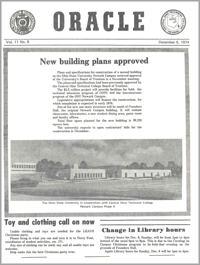 On March 8, 1965, seven and a half years after the Newark branch of The Ohio State University opened its doors, the first issue of the Newark campus student paper, The Oracle, was published through the efforts of Max Douglas, then Director of the O.S.U. Academic Center.

The title, "The Oracle," appears to have been so chosen based upon this opening piece in the first issue:

"Oracles, which the men of Greece gathered to hear, were divine revelations uttered in a moment of poetic frenzy by priests such as Pythia of Delphi. They were melodious, entrancing and influential. A newspaper, because it deals with far-off events, unfamiliar and unrelated to our personal lives, is a revelation and something of an oracle; for, although the news is not melodious, it is for many people entrancing and influential."

The paper continued through the 1968 relocation of the college from the Newark High School to its current site and also the 1971 founding of Central Ohio Technical College as a co-located college sharing the same campus. Surmised from the paper’s holdings in the Newark archive, The Oracle apparently suspended publication with the April, 1975 issue of volume 11.