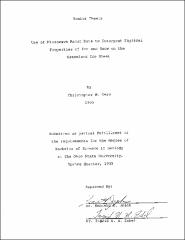 In situ observations of microwave radar backscatter were made at Dye-2 in south-central Greenland in 1993. Simultaneous observations of snow and ice physical properties were also acquired. Early in the season, it was found that 20° backscatter from the snow surface was determined mainly by the snow surface roughness. Later in the season the backscatter increases when temperatures are low. We attribute this fact to enhanced scattering from the ice within the radar resolution cell at the surface. This ice formed during the field season as a result of percolation and refreezing of surface meltwater. These observations have a direct implication for interpreting spaceborne SAR data acquired seasonally.