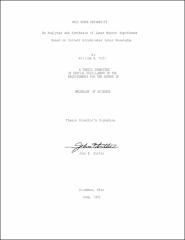 Lunar mascons were first discovered from the tracking data of Lunar Orbiter V. Since their discovery, numerous hypothesis have been formulated to explain their origin and estimate their below-surface characteristics. As new data from Apollo missions are analyzed, various hypothesis have been altered, some new ones have been added, some old ones have been dropped. In this paper, the author summarizes the current factual knowledge on lunar mascons. The most recent hypothesis are then presented, and tested against the facts. Finally, a compromise hypothesis is synthesized from the most tenable points of the current hypothesis.