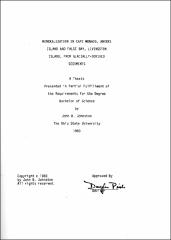 Fine glacially-derived sediment samples were collected in 1981 from the Cape Monaco area of Anvers Island and the False Bay area of Livingston Island. The samples were taken down "glacial stream" from the ice fronts of glaciers on both islands. The samples have been sieve separated, run through Bromoform, and examined microscopically in transmitted and incident light. The study was done to gain insight into rock composition and to the possible existence of anomalous mineralization up glacial stream from the sample locations. The secondary hydrothermal alternation products sericite, chlorite, and epidote were noted at both sample locations. Metallic minerals present include, in order of abundance, magnetite, hematite (after magnetite), sphalerite, pyrite, chalcopyrite and galena. Common rock-forming minerals present in the samples include quartz, plagioclase, biotite, augite, and hornblende, plus tremolite. The samples from both the Cape Monaco and False Bay areas have compositions similar to Andesite.