Strontium distribution for the carbonates of the Flagstaff Formation, Ephraim, Utah 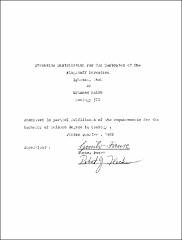