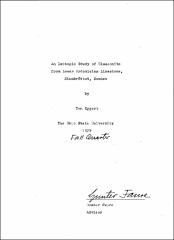 Glauconites separated from Lower Ordovician limestones collected near Stenbrottet, southern Sweden, were dated by the Rb-Sr method. Strontium and rubidium concentrations in the samples were determined by X-ray fluorescence analysis. Strontium isotope ratios were determined by isotope analysis of strontium on a mass spectrometer. Rb-Sr model dates were calculated with data so obtained and by use of the following equation derived from the law of radioactivity: where t is a date in the geologic past and A is the decay constant for the decay of 87Rb to 87Sr. Calculated model dates were earliest Devonian to latest Early Mississippian. These results compare well with those of previous work. Glauconites dated in this study have not remained closed systems with respect to rubidium and strontium throughout geologic time, and are therefore not suitable for dating by the Rb-Sr method. Addition of rubidium to or loss of strontium from the glauconite crystal lattice may have resulted from allogenic recrytallization of the glauconite. Fluids which may have circulated through the limestone after glauconite genesis probably acted as a vehicle for rubidium addition and strontium loss.