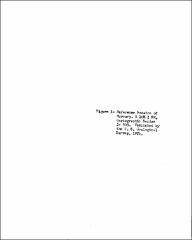 The author gathers evidence about the origin of the "hilly and lineated terrain" on the planet Mercury. Gault and Schultz (1975) suggested the possibility of this terrain forming from seismic shockwaves caused by the impact forming the Caloris Basin. To prove this, the cumulative distributions of craters counted in the "hilly and lineated terrain" were plotted in two ways: 1) By the total population of craters, and 2) individually as four morphologic crater classes. The results show the total population of craters diverges from the 10% saturation line between 20 to 30 kilometers. The total population shows a deficiency of small craters at the smallest diameters. A deficiency of class 4 craters exists at these small diameters. This fact is taken as evidence that the "hilly and lineated terrain" formed from seismic shockwaves from the Caloris impact.