Mediation as Metaphor and Method: The Visualization of an Odissi Body 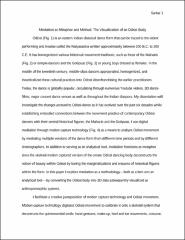 Odissi is an eastern Indian classical dance form that has homogenized various heterogeneous movement traditions, such as those of the Maharis or temple-dancers and the Gotipuas or young boys dressed as females, in the middle of the twentieth century, when middle-class dancers appropriated the dance form from the earlier practitioners. The dance is globally popular circulating through numerous Youtube videos and 3D dance-films. It is represented in major concert dance venues as well as in the Indian diaspora. As an Odissi practitioner, I am not only interested in ways that Odissi dance has evolved over the past six decades but also in establishing embodied connections between the movement practice of Odissi dancers with their central historical figures, the Maharis and the Gotipuas. I use digital mediation through motion capture technology as a means to investigate Odissi movement by mediating multiple versions of the dance form from different time periods and by different choreographers. Also, mediation functions as metaphor since the skeletal motion captured version of the ornate Odissi dancing body deconstructs the notion of beauty within Odissi baring the marginalizations and erasures of historical figures within the form. In this paper I explore mediating the Odissi body through motion capture technology and investigating mediation as a methodology—both as a lens and an analytical tool. I am interested in the creative juxtaposition of motion capture technology and Odissi movement. Motion capture technology digitizes Odissi movement into 3D data and calibrates it onto a skeletal system that disornaments the Odissi body from its quintessential smile, hand-gestures, make-up, heel and toe movements, costume, and facial expressions. It apparently disembodies the dancing Odissi body of its accoutrements baring a skeletal system to then be used as an analytical tool for examining spatial tensions, inertia, weight-shift, and trajectory of Odissi movement. The 3D environment enables a three dimensional perspective to analyze the moving body based on kinetic properties. I can also use the 3D data for facilitating further 3D visualizations of abstract figures or digitally created avatars. The nationalist construction of Odissi dance by a curious partnership between Victorian puritanism and Brahmanical supremacy, has traditionally marginalized the indigenous dancing bodies of the Maharis and the Gotipuas. After achieving political independence from British colonization, Indian elites decided to develop indigenous movement practices as a way to establish India’s rich ancient heritage. While Maharis and Gotipuas provided the historical context for founding Odissi dance as a two thousand year old tradition, they were marginalized in the name of refinement, standardization, and codification of movement. The last surviving Mahari passed away in March 2015 even though the Gotipuas continue to thrive in their indigenous context in the eastern Indian state of Odisha. The Mahari body was too excessive given their undomesticated sexual relations with the societal male elites outside of social marriage. By definition, they were married to Jagannath, the presiding male Hindu deity of Odissi. Her ritualistic performance stood for the sexual pacification of Jagannath. Although cultural reformers in the 1950s based Odissi dance on Mahari ritual performance, the actual Maharis were criminalized and stigmatized as prostitutes. The newly emerging Indian citizen educated in British values of propriety found the Mahari transgressive of social norms and simplistically dismissed her as being unrespectable, even though the Brahmanical system continued unscathed. Maharis were scapegoated for an entire patriarchal tradition that was also emancipatory in some respects, such as Maharis enjoyed certain civil liberties unlike her contemporaneous domesticated wives. Interested in a conversation between the corporeal and the mediated dancing bodies of Odissi, I argue that the live Odissi dancing body is disembodied because of the marginalization of the Gotipua and the death of the Mahari, while the motion capture mediation resurfaces the embodiment of the erased Mahari. Mediation is a metaphor of embodiment. The reductive dichotomy of live embodiment and disembodied digitality does not hold in this situation.