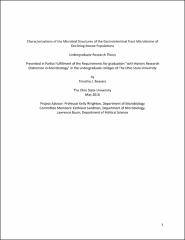 Dramatic declines in the moose populations of the northern United States have prompted several ecological investigations into how the environment could potentially impact moose health. This study uses 16S rRNA gene sequencing to analyze the microbial community composition of the gastrointestinal tract (GIT) of moose from Minnesota and Columbus, Ohio. The objective was to better understand if the microbiome could serve as an indicator for wild animal health. Here we examine microbial community structure, membership, and diversity and correlate these with cause of death along the GIT from deceased moose. This is the first examination of the microbiome of the entire GIT of wild moose, as prior studies focused on rumen tissue and feces. My 16S rRNA gene analysis uses Illumina MiSeq sequencing of the V4 hyper-variable region. Raw reads were processed using QIIME 1.9.1 and were statistically analyzed using Primer v6 and R. Rumen fluid short-chain fatty acid (SCFA) concentrations were quantified using High Performance Liquid Chromatography. Statistical analyses showed that microbial community composition was structured based upon organ or excretion location within the GIT. Several intestinal locations were statistically differentiable based upon the health condition and the nutritional status of the moose. In particular, Shannon Diversity was much lower in the rumen fluid of moose classified as sick, which correlated to statistically lower concentrations of acetate and propionate. Higher enrichments of Bacteriodetes were observed in the microbiome of sick moose with the BS11 gut group OTU being the most prevalent enrichment. These findings show there is a correlation between moose health and their microbiota, suggesting that microbiome data could serve as a biological indicator for animal health status.