Aggression to Apathy: Public Opinion and the Philippine Question 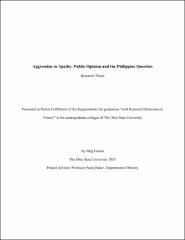 The United States' acquisition of the Philippine Islands in 1898 following the Spanish-American War was a contentious issue amongst the public, and was made more contentious by the outbreak of the Philippine-American War in 1899. Though the U.S. had entered the Spanish-American War to guarantee Cuban independence, now American troops fought Filipino nationalists to maintain the Philippines under U.S. control in a war that lasted officially until 1902. In his article "Reluctant Liberator: Theodore Roosevelt's Philosophy of Self-Government and Preparation for Philippine Independence" historian Stephen Wertheim argues that anti-imperialist public opinion forced the pro-expansion President Theodore Roosevelt to begin a process of independence for the Philippine Islands in 1908. I argue that the public did not become more anti-imperialistic within Roosevelt's administration. In my paper I examine the press, politics, morals, elections, and views on race and "the Monied interests," as factors in public opinion that stayed consistent before and during Roosevelt’s years as president. With no public opinion polls to help gauge Americans’ views, I have used contemporary newspaper articles and correspondence to eminent politicians on both sides of the issue to construct my argument. Rather than anti-imperial sentiment increasing and being a factor in Roosevelt’s turn away from U.S. involvement in the Philippines, the interest in the debate over imperialism waned during this period. While there continued to be both advocates and opponents on the issue of American territorial acquisitions, the importance of the issue and the force with which the two sides clashed faded. The issue simply lost the attention of the American public. Americans' ultimately apathetic response to early 20th century imperialism could have influenced other foreign policy decisions during the period, and could also apply to debates surrounding contemporary foreign policy issues.