Efforts to Improve Roadway Safety: A Collaborative Approach between Amish Communities and a Professional Engineering Society 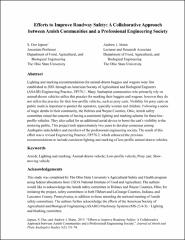 Lighting and marking recommendations for animal-drawn buggies and wagons were first established in 2001 through an American Society of Agricultural and Biological Engineers (ASABE) Engineering Practice, EP576.1. Many Anabaptist communities who primarily rely on animal-drawn vehicles utilize this practice for marking their buggies and wagons; however they do not utilize the practice for their low-profile vehicles, such as pony carts. Visibility for pony carts on public roads is important to protect the operators, typically women and children. Following a series of tragic deaths in their community, the Holmes and Wayne Counties, Ohio, Amish safety committee raised the concern of having a consistent lighting and marking scheme for these low-profile vehicles. They also called for an additional aerial device to boost the cart's visibility to the motoring public. This project took approximately two years to develop consensus among Anabaptist stakeholders and members of the professional engineering society. The result of this effort was a revised Engineering Practice, EP576.2, which enhanced the previous recommendations to include consistent lighting and marking of low-profile animal-drawn vehicles.