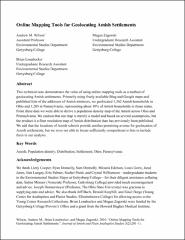 This technical note demonstrates the value of using online mapping tools as a method of geolocating Amish settlements. Primarily using freely available Bing and Google maps and published lists of the addresses of Amish ministers, we geolocated 1,362 Amish households in Ohio and 1,203 in Pennsylvania, representing about 10% of Amish households in those states. From these data we were able to derive a population density map of the Amish across Ohio and Pennsylvania. We caution that our map is merely a model and based on several assumptions, but the product is a finer resolution map of Amish distribution than has previously been published. We add that the locations of Amish schools provide another promising avenue for geolocation of Amish settlements, but we were not able to locate sufficiently comprehensive lists to include them in our analysis.