The Plain Mennonite Face of the World War One Conscientious Objector 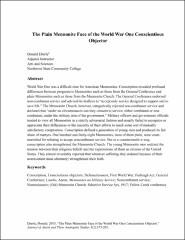 World War One was a difficult time for American Mennonites. conscription revealed profound differences between progressive Mennonites such as those from the General Conference and plain Mennonites such as those from the Mennonite Church. The General Conference endorsed non-combatant service and advised its draftees to "accept only service designed to support and to save life." The Mennonite Church, however, categorically rejected non-combatant service and declared that "under no circumstances can they consent to service, either combatant or noncombatant, under the military arm of the government." Military officers and government officials tended to view all Mennonites in a strictly adversarial fashion and usually failed to recognize or appreciate their differences or the sincerity of their efforts to reach some sort of mutually satisfactory compromise. Conscription defined a generation of young men and produced its fair share of martyrs. One hundred and thirty-eight Mennonites, most of them plain, were court-martialed for refusing to accept noncombatant service. But in a counterintuitive way, conscription also strengthened the Mennonite Church. The young Mennonite men realized the tension between their religious beliefs and the expectations of them as citizens of the United States. They almost invariably reported that whatever suffering they endured because of their nonresistant stand ultimately strengthened their faith.