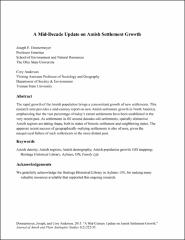 The rapid growth of the Amish population brings a concomitant growth of new settlements. This research note provides a mid-century report on new Amish settlement growth in North America, emphasizing that the vast percentage of today's extant settlements have been established in the very recent past. As settlements in-fill around decades-old settlements, spatially distinctive Amish regions are taking shape, both in states of historic settlement and neighboring states. The apparent recent success of geographically outlying settlements is also of note, given the unequivocal failure of such settlements in the more distant past.