Off the Map: Memorializing Trauma in 21st Century Dominican Identity 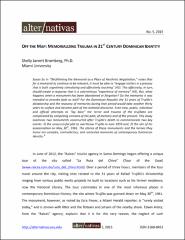 Susan Sci in "(Re)thinking the Memorial as a Place of Aesthetic Negotiation," notes that for a memorial to continue to be relevant, it must be able to "engage visitors in a process that is both cognitively stimulating and affectively touching" (43). This affectivity, in turn, should create a response that is a coterminous "experience of memory" (43). But, what happens when a monument has been abandoned or forgotten? Do the memories it was intended to provoke fade as well? For the Dominican Republic the 31 years of Trujillo’s dictatorship and the recovery of memories during that period would take another thirty years to surface and become part of the national discourse. Even now, public, individual and official attempts to "lay bare" the terror and trauma of the trujillato are complicated by competing versions of the past, of memory and of the present. This study examines two monuments constructed after Trujillo's death to commemorate two key events: 1) the unsuccessful plot to overthrow Trujillo in June 1959 and; 2) the site of his assassination on May 30th, 1961. The stories of these monuments and the heroes they honor are complex, contradictory, and contested memories of contemporary Dominican identity.