Irony, Humour and Cynicism in Relation to Memory: a Contrastive Analysis between the Argentinian and the Mexican Literary Field 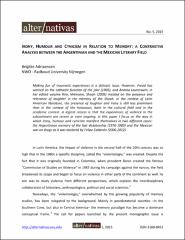 Making fun of traumatic experiences is a delicate issue. However, Freud has worked on the cathartic function of the joke (1905), and Andréa Lauterwein, in her edited volume Rire, Mémoire, Shoah (2009) insisted on the presence and relevance of laughter in the memory of the Shoah. In the context of Latin American literature, the presence of laughter and irony is still less prominent than in the context of the Holocaust, both in the cultural field and in the academic context. A logical reason is that the experiences of violence in the subcontinent are recent or even ongoing. In this paper I focus on the way in which irony, humour and cynicism manifest themselves in two different cases: the Argentinean memory of the last dictatorship (1976-1983) and the Mexican war on drugs as it was declared by Felipe Calderón (2006-2012).