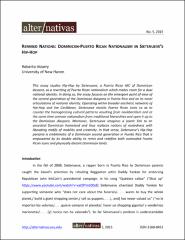 This essay studies Hip-Hop by Sietenueve, a Puerto Rican MC of Dominican descent, as a rewriting of Puerto Rican nationalism which makes room for a dual national identity. In doing so, the essay focuses on the emergent point of view of the second generation of the Dominican diaspora in Puerto Rico and on its novel articulations of national identity. Operating within broader aesthetic networks of Hip-Hop and the Caribbean, Sietenueve revisits Puerto Rican icons so as to counter the homogenizing cultural patterns resulting from neoliberalism and at the same time unmoor nationalism from traditional hierarchies and open it up to the Dominican diaspora. Moreover, Sietenueve imagines a poetic link to an ancestral Dominican homeland and thus replaces notions of rootedness with liberating motifs of mobility and creativity. In that sense, Sietenueve's Hip-Hop persona is emblematic of a Dominican second generation in Puerto Rico that is empowered by its double ability to remix and redefine both outmoded Puerto Rican icons and physically distant Dominican lands.